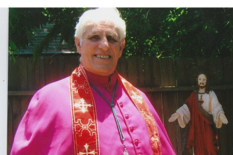 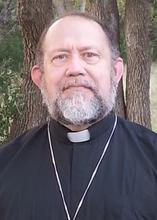 Archbishop Albert was originally accepted into the Old Catholic Church of North America (now ICCONA) in August 2008 under Bishop Ted Smith. Currently, Archbishop Albert has added to his duties as Archbishop by overseeing the Diocese of Florida. Archbishop Albert has extensive knowledge in Biblical studies and Liturgical celebrations, having studied through Trinity College of the Bible and Theological Seminary, St. Joseph the Worker Seminary, and St. Michael's Seminary. Archbishop Albert lives in Dayton, TX, and his secular job involves inventory and sales management, as well as OSHA Safety Training for a large distribution company. Archbishop Albert loves spending time with his wife Amy, children and grandchildren.

Bishop Anthony A.M. Pearson, of New Braunfels, Texas, has been in Christian ministry for 40 years serving as a pastor, educator, author, counselor and consultant. He also worked in law enforcement, the military, and as a public educator/counselor. After 20 years as an ordained protestant, evangelical, Baptist minister, serving churches from Massachusetts to Texas; he embraced the Catholic faith after spiritual visions and revelations he received while on pilgrimage to the Holy Lands in 1991. Returning to higher education in 1994, he completed numerous graduate degrees and received an honorary doctorate. Through these experiences he gained new insights and understandings; and began the journey of preparation which led to his seeking Holy Orders through ICCONA, and is studying as a seminarian at St. Michael’s Seminary.  He is a licensed professional counselor and a licensed marriage and family therapist in the state of Texas. He is married to Marsha Lee Emery, and is father to five sons and grandfather to ten grandchildren.

The Benedictine Community of the Immaculate Heart of Mary

​The Benedictine Community of the Immaculate Heart of Mary (OSB-MI) is a part of the One Holy Catholic and Apostolic Church. It is a canonically             recognized Community in inter-communion with ICCONA. The express purpose is to live the Rule of St. Benedict as either a vowed Religious or as a          layperson, known as an Oblate.

Each level of the levels of commitment have their own responsibilities. Religious take vows and Oblates make promises. The traditional vows of poverty, Chasity, and Obedience along with the Benedictine vow of conversion of lifestyle (conversatio morum). These vows are taken in light of a secular lifestyle. Members of both levels of commitment may be either single, or married. The administrator of the Order is Bishop-Abbot Tony Pascaretta, OSB-MI. Educationally, he is a psychotherapist and holds a doctorate in psychology, and is a Licensed Professional Counselor and Licensed Family and Marriage Therapist. Those interested should feel free to contact Bishop Tony at bishoptony.pascaretta@gmail.com or visit their web site at:
Houston Benedictine House of Contemplative Prayer at blogspot.com